The 117th Congress and the US-Israel Alliance

The 117th Congress and the US-Israel Alliance 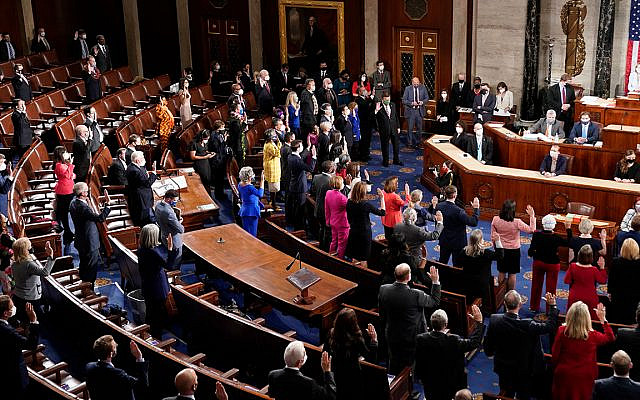 As the 117th Congress gets to work, major challenges at home and across the globe will require congressional attention. Some of these challenges, such as a hostile Iran, will directly impact the US-Israel relationship.  At the same time, Congress will have opportunities to build on recent successes in the Middle East, like the signing of the Abraham Accords. With a razor thin majority, bipartisan support is going to be critical to advance any issue or policy.

And, many newly elected House members have expressed strong support for the US-Israel relationship, including Reps. Kathy Manning (D-NC), Jake Auchincloss (D-MA), Peter Meijer (R-MI) and Andrew Garbarino (R-NY). Rep. Ritchie Torres (D-NY), a self-avowed progressive who declared that he has no interest in joining “the Squad,” cited his strong support for Israel as a key distinction.

It’s true that not all members of Congress share this support for Israel.  Rep. Rashida Tlaib (D-MI) got “back to work” last week making offensive, false statements in another blatant attempt to delegitimize the right of Jews to a national homeland.  She declared that Israel was a “racist” state, echoing the long-debunked claim that Zionism is racism.  Such lies do great harm to the cause of peace.

A few new members of Congress have expressed opposition to the US-Israel relationship, joining Tlaib and a small but vocal cohort of returning members. Incoming Congresswoman Cori Bush (D-MO), for example, has expressed support for the Boycott, Sanctions and Divestment (BDS) movement, and newly-elected Rep. Marie Newman (D-IL) has expressed support for efforts to restrict and condition US aid to Israel. She joined Rep. Jamaal Bowman (D-NY) and a few others in criticizing Israel for not providing vaccines to Palestinians under the authority of the Palestinian Authority or Hamas, even though they had rejected offers of Israeli cooperation, announcing in December they had procured vaccines independently.

Among Republicans, a small few, such as Rep. Thomas Massie (R-KY) and Senator Rand Paul (R-KY), have set themselves apart in opposing foreign aid, legislation that condemns the BDS movement, and sanctions on Iran.

In the Senate, after very competitive races, there are both new and returning members who support the US-Israel relationship. Strong supporters such as Gary Peters (D-MI), Tina Smith (D-MN), Chris Coons (D-DE), Joni Ernst (R-IA), Thom Tillis (R-NC) and Susan Collins (R-ME) won their elections and have returned to the Senate. Newly-elected Senators John Hickenlooper (D-CO) and Mark Kelly (D-AZ), as well as Alex Padilla (D-CA) who was appointed to fill the seat vacated by Vice President Kamala Harris, have expressed their support for the US-Israel relationship.

This broad and deep support for the US-Israel relationship will be important as Congress addresses key global challenges such as Iran. The Islamic Republic has increased its uranium enrichment and threatened to kick out inspectors next month. While debate about best tactics is certain, Congress should work across the aisle to develop policies that will stop Iran’s nuclear program now and in the future while also addressing Iran’s other nefarious behaviors such as its support for terrorism, expansion of its ballistic missile program, and efforts to challenge Israel and other American allies in the region.  This is a time when our alliances are critical, including with Israel, and recent statements that the United States will consult closely with its allies in the region is good news.

At the same time, the US-Israel relationship can help both our countries address other global challenges like climate change and the COVID-19 pandemic. Israel is outpacing the world right now in its vaccine rollout, and joint cooperation agreements between American and Israeli scientists are helping to accelerate efforts to fight the virus. As the US seeks global solutions to climate change, sharing innovative US and Israeli technology around renewable energy, water and food security, can help accelerate solutions.

While the challenges are great, we enter 2021 confident that the strong bipartisan coalition of pro-Israel supporters in Congress will continue to adopt policies that recognize the importance of a robust US-Israel relationship in fostering a more peaceful, prosperous, and secure future for all.

ABOUT THE AUTHOR
Jeff Mendelsohn is the founding Executive Director of Pro-Israel America. Jeff brings years of legislative, political and organizational experience, having served as chief of staff for two Texas members of Congress for a dozen years. During his ten-plus years at AIPAC, Jeff launched and managed the AIPAC Outreach Program which successfully engaged non-Jewish constituencies, including Hispanics, African Americans, progressives, veterans and evangelical Christians in pro-Israel activism.
Paid for by Pro-Israel America United and not authorized by any candidate or candidate committee.